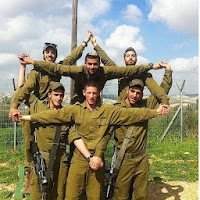 The holiday of Sukkot is the festival of Jewish unity. Here is the story:

A man once had four sons who never stopped quarrelling with one another. He was always telling them how much easier life would be if they worked together but they took absolutely no notice of him.

One day he decided to show them what he meant. He called the sons together and put a tightly tied bundle of sticks on the floor in front of them. "Can you break that?" he asked the youngest son. The boy put his knee on the bundle but though he pressed and pulled with his arms he could not bend the wood. The father asked each son in turn to try to break the bundle, but none of them could do it.

Then he untied the string and scattered the sticks. "Now try," he said. The boys broke the sticks easily in the hands.

"Do you see what I mean?" asked the father. "If only you stand together no one can hurt you. If you all disagree the whole time and insist on going your separate ways, the first enemy you meet will be able to destroy you."
Posted by simcha at 3:45 PM